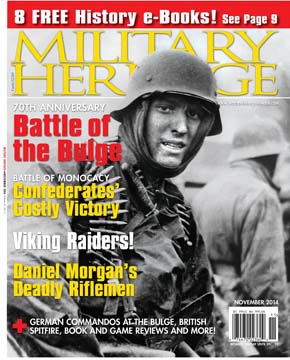 Bastogne Must Fall: Hitler’s 72-Hour Gamble in the Ardennes Forest

In his offensive gamble in the Ardennes in late 1944, Adolf Hitler gave the German 5th Panzer Army just 72 hours to reach the Meuse River. But he failed to factor in American grit.

In the early morning of December 16, 1944, 80-man German shock companies from the 5th Panzer Army slipped toward the American lines in the Ardennes region under the cover of heavy fog. They intended to slip past the sleepy American outposts and get behind the Allied line in the mountainous region that straddled Belgium and Luxembourg. The shock troops cut any communication wires they found. When the main attack came, it was hoped these shock troops would be poised and ready to pounce on the American defenders before they had time to react.

Behind them the rest of the 5th Panzer Army anxiously awaited the signal to attack.

German gunners readied their artillery pieces and looked at their watches. They were waiting for the order to unleash a heavy barrage on the American forces. Besides the 5th Panzer Army, two other German armies, the 6th Panzer Army to the north and the 7th Army to the south, were poised to attack the mostly unsuspecting American GIs.

At 5:30 AM, the order was issued for the artillery to fire. The German guns roared to life, spitting orange flames from their muzzles in the darkness.

German leader Adolf Hitler’s desperate offensive gamble in the West to drive the Allies from Germany’s doorstep and possibly change the course of the war had begun.

“Bastogne Must Fall,” Mike Phifer’s exciting exploration into Hitler’s final push into the Ardennes, is just one of the many features you’ll find inside the November issue of Military Heritage magazine.

“Bastogne Must Fall”
In his offensive gamble in the Ardennes in late 1944, Hitler gave the German 5th Panzer Army just 72 hours to reach the Meuse River. But he failed to factor in American grit.

“A Murderous Fire of Musketry”
Lew Wallace scraped together a Union army to contest Jubal Early’s crossing of the Monocacy River on July 9, 1864. The day-long battle bought precious time to prepare the capital against the Confederate raid.

“Race to Victory”
British warships converged on a flotilla of German destroyers at Heligoland Bight on August 28, 1914. During the encounter, Vice Admiral David Beatty’s battle cruisers inflicted substantial damage on the Germans.

“French Fiasco at Dettingen”
The Duc de Noailles laid a clever trap for the allied army at Dettingen, but one French general’s folly turned near certain defeat for King George II into a resounding allied victory.

“Northern Foe”
The western Vikings were ruthlessly efficient warriors. As such, they were universally feared by those they preyed on for 300 years.

As always, please let us know what you think about these and other stories online at WarfareHistoryNetwork.com. We’d love to hear what you think.