For veterans, history buffs and the general public, anyone interested in American history should at some point visit Arlington National Cemetery.

Millions of people travel to Washington, DC, to view famous icons of the United States. Mainly these are working institutions like the Congress and the White House or edifices such as the Abraham Lincoln and Thomas Jefferson Memorials. Many travelers have the good fortune to cross the Potomac River to visit Arlington National Cemetery, the nation’s most hallowed burial ground.

Arlington Cemetery is striking in a number of ways. For one, it is a beautiful place: tall oaks over trimmed green turf on rolling hillocks that occasionally give glimpses of the nation’s capital across the valley. For another, it is remarkably restrained.

One can imagine that in Europe such a personage as General Pershing might have a building erected to him, or that our own “Guilded Age” would have created far more extravagant monuments than are evident here. Rather, the markers and memorials are on the whole simple, as if those who wish to remember and those wishing to be remembered prefer to rely on recollections of such intangibles as honor, service, and duty rather than architectural and funereal flights of fancy. Here the man with the highest rank ever given in the United States, General of the Armies John Pershing, lies beneath a simple government-issue headstone of the type that also serves any private.

A Treasure-Trove of History 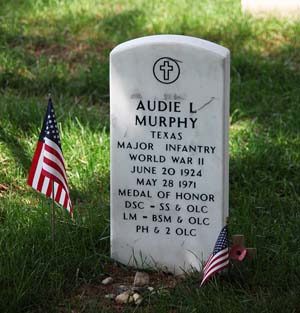 Audie Murphy has a government-issue headstone no different from those of thousands around him, except that Murphy’s lists more awards. Actor and World War II Marine Lee Marvin lies beside boxer Joe Louis. Marvin was wounded in the Pacific; his headstone reads: “Lee Marvin, PFC, U. S. Marine Corps, World War II, Feb. 19 1924, Aug 29 1987.” He is one of many.

Anyone interested in U.S. military history should visit the cemetery. Here lie several veterans of the Revolutionary War. And the cemetery, of course, has its roots in the Civil War, when the grounds were taken over at the suggestion of the astonishing Union Quartermaster General Montgomery Meigs because soldiers were dying so fast in Washington hospitals the city had run out of space in which to bury them. Meigs is interred here, as are Abner Doubleday, Phil Kearny, Arthur MacArthur, David Porter, William Rosecrans, Phil Sheridan, Dan Sickles, John Gibbon, and John Schofield.

Arlington has its surprises. Hundreds of Confederates are buried here, and were since the Cemetery’s early days. And there is a tall Confederate Monument, dedicated in 1914, in the cemetery’s Confederate Section. A great number of women are buried at Arlington, too. Wives, of course, but also hundreds of nurses, who lie interred around the Nurses’ Memorial.

Most striking of all are the thousands upon thousands of white marble headstones, the ranks of ordinary Americans who took up arms in times of trouble, many of whom lived less than two and a half decades. Without their dedication and sacrifices, the United States would not have become a beacon of democracy and justice. This is why Arlington National Cemetery is hallowed ground.