The U.S. Navy relied heavily on its versatile destroyers in two world wars to fulfill a variety of missions.

On November 1, 1943, a gunfight unfolded on the high seas. It began with a more conventional naval battle, a depth-charge attack by an American destroyer on a German U-boat. USS Borie, an older Clemson-class destroyer built just after World War I, picked up a radar contact that turned out to be the U-256, a Type VIIC submarine. Borie’s captain, Lt. Cmdr. Charles

H. Hutchins, ordered his ship to investigate and soon attacked the enemy vessel. He thought the submarine sank, but U-256 was only damaged. The U-boat limped home. It would later conduct three more patrols before being surrendered at the end of the war.

Shortly afterward, Borie’s crew detected another Type VIIC submarine, the U-405. The destroyer raced to the scene and dropped more depth charges, forcing the submarine to the surface only 400 yards away. The destroyer was maneuvered to open the range and allow her main battery of 4-inch guns to open fire. The sailors manning the 20mm antiaircraft guns also joined in, peppering the U-boat with shellfire.

The Germans replied with their own antiaircraft guns, striking Borie around the bridge and in her forward engine room. When some of the Germans tried to man U-405’s deck gun, they were met by a hail of 20mm projectiles. One of Borie’s 4-inch gun crews then blew the submarine’s deck gun completely off its hull. 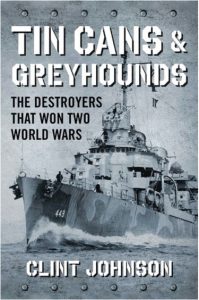 Hutchins ordered his ship to ram the rapidly maneuvering submarine. Just before it struck, a large wave lifted the destroyer so it instead landed atop U-405 at about a 30-degree angle from parallel. The two vessels became wedged together. All of Borie’s main guns and most of her 20mm cannons couldn’t depress far enough to hit the submarine. Determined to keep up the fight, the American sailors opened their ship’s small arms lockers and grabbed shotguns, Thompson submachine guns, and rifles.

What followed was a gun battle that rivaled anything from the boarding actions of centuries past. The Americans poured small arms fire onto U-405’s deck, killing or wounding any German who dared try to man his remaining deck weapons. Eventually ammunition began to run low. Still, one German was knocked into the ocean by a 4-inch shell casing thrown by an American sailor. Another American crewman threw his sheath knife at a German. The blade sunk into his torso and he slipped into the water.

Eventually more waves pulled the two vessels apart and U-405 tried to move away. More depth charges were fired and another 4-inch shell struck the submarine’s exhaust, after which her crew began to abandon ship. Some of the men fired flares into the night sky, signaling another nearby U-boat. That submarine fired a torpedo at Borie but missed. Borie was trying to rescue the German crew but had to move off in light of the new attack. None of U-405’s crew was seen again.

Borie’s hull was badly damaged by the ramming attempt and she began to sink. The crew struggled to keep her afloat in worsening seas but eventually the ship had to be abandoned. In the end, Borie was torpedoed by an American plane after the surviving crew was rescued. This is one of the most astounding stories of destroyers from either world war and it is just one of the tales included in Tin Cans and Greyhounds: The Destroyers That Won Two World Wars (Clint Johnson, Regnery History, Washington, DC, 2019, 307 pp., photographs, notes, bibliography, index, $29.99, hardcover).

Destroyers are among the most versatile and necessary ships for a major naval power. They can act as combatants in their own right but also serve as escorts, submarine hunters, rescue ships, or scouts. There is little their crews have not been tasked to do over the course of two world wars and, success or failure, they have always answered the call. While they perhaps lack the size and majesty of cruisers and battleships, destroyers carry their full measure of courage and skill.

The author accomplished his own skillful feat with this new book. Hundreds of destroyers served in the time this work covers. Thus, it is a daunting task to write a volume worthy of such a great number over so long a period. Nevertheless, the book does so, going through World War I, the interwar period, and both the Atlantic and Pacific during World War II. It pays fitting tribute to the thousands of sailors who crewed these ships in war and peace. The work is well illustrated and thoroughly researched. The writing is clear, concise, and readable. 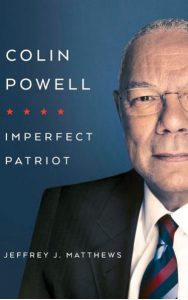 Captain Colin Powell arrived in Saigon, South Vietnam, on Christmas Day 1962. He was assigned as the senior tactical adviser to an infantry battalion of the Army of the Republic of Vietnam’s (ARVN) First Division. He advised three successive commanders of the unit, all captains but with varying degrees of military skill and capability. He did his best to work with them through months of combat operations; however, he stepped on a punji stick in July 1963 that pierced his right foot.

As a result of his debilitating injury, Powell had to limit himself to more sedate duties for the remainder of his tour. Powell would return to Vietnam in 1968 for another tour, this time as a major and executive officer of the 3rd Battalion, 11th Infantry, part of the 23rd Americal Division. His performance there soon caught the eye of the division commander and Powell was given a place on the unit’s staff. Along the way he learned many lessons—early instruction on a path that would eventually take him to high military and civilian office.

This work goes on to cover the lofty career of Powell, who eventually became chairman of the Joint Chiefs of Staff and Secretary of State. The author highlights both the successes and failures of his subject, revealing a human being navigating the complexities of leadership and power at the highest levels. It showcases the difficulties and consequences of decision making at the strategic level. 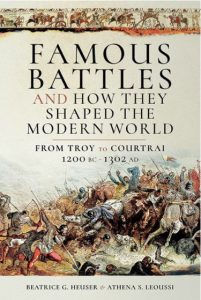 The Battle of Marathon saved Athens twice. First when the Athenian and Plataean hoplites destroyed the Persian center during the battle, driving their enemies back to their ships in flight. Despite the heavy losses, the Persians sailed to Phaleron, planning to attack Athens before its victorious army could return from Marathon. The Greeks made a forced march, reaching Athens in time to defend the city. Seeing this, the Persians sailed away without offering battle and Athens survived to take its place in history. It was a great victory against the hated Persians. Afterward, the Greeks no longer feared the bellicose Persians.

There is no way to accurately count the number of battles that occurred over human history, but the important ones, those that made a difference in the world afterward, are remembered. This new work is the first in a two-book series that examines those battles and their influence on Western civilization. The authors polled accomplished academics to help compile their list. Each chapter covers a different engagement or conflict with thoughtful writing and engaging ideas about its significance. It is an interesting work focused on the grand sweep of history, yet it keeps the reader grounded in the reality of each battle’s effects. 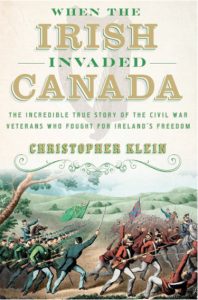 The American Civil War was not yet a year ended when veterans of both the Union and Confederacy once again shouldered their rifles and marched off to war. This time they shared a common goal; this small army’s intent was to invade and conquer Canada, then still a British province, and hold it until the British empire relinquished its hold on Ireland. These men were of Irish heritage, many of them recent immigrants who felt they were more Irish than American and wanted to free their homeland. They succeeded in seizing a tiny part of Canadian land for three days. Their story is a patriotic tale of men fighting for what they thought was right.

The attacks on English soil, known as the Fenian raids, are well covered in this new book. It is well researched, fleshing out the story with creditable detail. The writing is clear and readable throughout. 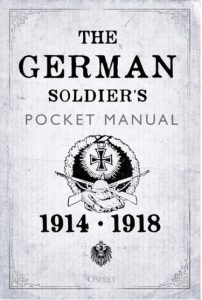 The German Soldier’s Pocket Manual 1914-1918 (Edited by Stephen Bull, Osprey Publishing, 2018, $15.00, hardcover) This work collects various writings about the German Army and its troops. It reveals what life was like for German soldiers during the conflict.

Run to the Sound of the Guns: The True Story of an American Ranger at War in Afghanistan and Iraq (Nicholas Moore and Mir Bahmanyar, Osprey Publishing, 2018, $30.00, hardcover) Moore is a 10-year veteran of the War on Terror. This book recounts his experiences on numerous missions.

The General’s War: Operational Level Command on the Western Front in 1918 (David T. Zabecki, Indiana University Press, 2018, $45.00, hardcover) This is a study of higher level command during the Great War. It reveals how senior officers dealt with the tactics and weapons of the conflict.

Beyond the Call: Three Women on the Front Lines in Afghanistan (Eileen Rivers, Da Capo Press, 2019, $27.00, hardcover) Female soldiers went everywhere and performed the same duties as their male counterparts in Afghanistan. This work highlights their service and challenges.

Great Battles: Ypres (Mark Connelly and Stefan Goebel, Oxford University Press, 2018, $27.95, hardcover) This Belgian city was at the heart of World War I. The authors study how the various combatants viewed the fighting around it.

In the Hurricane’s Eye: The Genius of George Washington and the Victory at Yorktown (Nathaniel Philbrick, Viking Books, 2018, $30.00, hardcover) This study reveals the importance of the naval fighting in the Chesapeake Bay and how it influenced the outcome of the war. 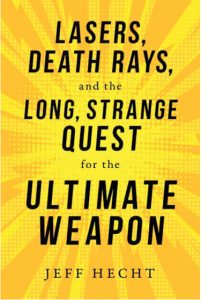 Lasers, Death Rays, and the Long, Strange Quest for the Ultimate Weapon (Jeff Hecht, Prometheus Books, $25.00, hardcover) The author recounts the history of America’s research on and obsession with laser weapons. The story starts in the 1950s and continues through the present day.

Spy Pilot: Francis Gary Powers, the U-2 Incident, and a Controversial Cold War Legacy (Francis Gary Powers, Jr. and Keith Dunnavant, Prometheus Book, 2019, $25.00, hardcover) Newly declassified documents and CIA debriefings were used to write this new account of the U-2 incident. Doubts linger over Gary Powers’ actions and this book seeks to exonerate him of these rumors.

Lucullus: The Life and Campaigns of a Roman Conqueror (Lee Fratantuono, Pen and Sword Books, 2018, $39.95, hardcover) Lucullus conquered the warring kingdoms of Asia Minor and made them part of the Roman Empire. This work is a thorough biography focusing on his military achievements.

Valentine Baker’s Heroic Stand at Tashkessen 1877: A Tarnished British Soldier’s Glorious Victory (Frank Jastrzembski, Pen and Sword Books, 2018, $34.95, hardcover) Baker was a disgraced British soldier dismissed from the service. His victory over Russian troops during the 1877 war with Turkey provided some measure of redemption.