The Island Fortress: The Siege of Malta

During the Siege of Malta, the small British bastion refused to surrender before an Axis aerial onslaught.
No comments
Categories: WWII

When World War II began in September 1939, the three small islands in the central Mediterranean known as Malta were part of the British Commonwealth.

Malta’s geographical position would prove to be one of the most decisive factors of the war in the Mediterranean. It lay 985 miles from the British base at Gibraltar and 820 miles from the base at Alexandria, astride Britain’s sealanes to Egypt and the Middle East and through the Suez Canal to India, Asia, and Australia. From Malta’s harbors it was possible for the entire Mediterranean to be dominated by warships and submarines, and from its three airfields and seaplane base by fighters, bombers, torpedo, and reconnaissance aircraft.
[text_ad]

In June 1940, Mussolini’s Italy allied itself with Hitler’s Germany and declared war on Britain and Malta, 95 square miles in extent, smaller than London, found itself surrounded by enemy territory and bases. Sicily was only 60 miles to the north, and Italian-ruled Libya 180 miles to the south. Italy’s navy and air force were large, modern, and strategically placed at bases on Sicily, Sardinia, Pantellaria, and the Dodecanese group of islands. A week after Italy’s declaration of war, France’s Marshal Petain ordered the French to stop fighting and sued for peace. Malta was left threatened by a potential German takeover of the powerful French fleet and its bases in the Mediterranean and North Africa.

Malta’s air defense consisted of 42 antiaircraft guns, five antiquated Fairey Swordfish torpedo planes of the Fleet Air Arm, a Queen Bee target drone, and four Gloster Gladiator biplane fighters. Early on the day after Italy’s declaration of war, 25 Savoia Marchetti SM-79 bombers of the Regia Aeronautica, escorted by 12 Macchi C.200 fighters, came in from Sicily to bomb the Maltese capital of Valletta and the installations around Grand Harbor. The four Gladiators went up to intercept them, and the Siege of Malta had begun. 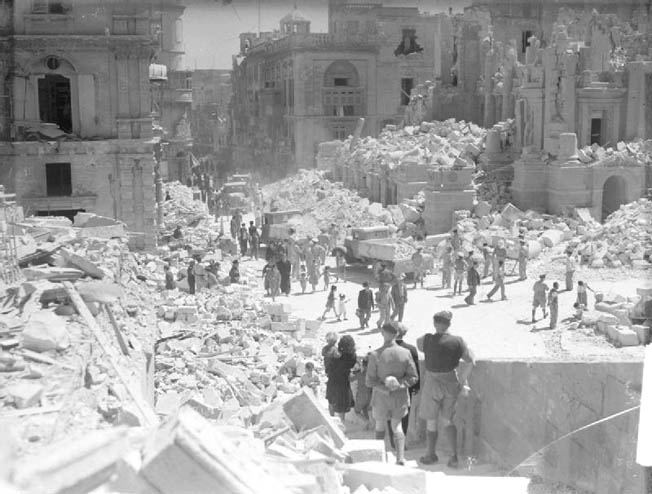 The Gladiators, older and slower than the Italian planes, were able only to slightly damage one of the bombers before they flew away, leaving smoking ruins behind them. The Italians came back in increasing numbers, six times in the next nine days, and the Gladiators failed to shoot down any of them. Then, on June 22 an SM-79 on reconnaissance was intercepted and shot down by a Gladiator. During the same week, two more bombers were shot down. One Gladiator was so badly damaged in the actions it had to be written off, leaving the remaining three to be nicknamed “Faith, Hope and Charity.”

Air raids continued every day, but on June 28 four Hawker Hurricane fighters were flown to Malta from North Africa to reinforce the Gladiators, with 12 additional Swordfish torpedo planes intended to attack Italian shipping. With their arrival, air raids became less frequent. When more Hurricanes were ferried to Malta by aircraft carrier in August there were enough to form a squadron. Other aircraft filtered in to create a small strike force consisting of the 12 Swordfish torpedo aircraft and a few Vickers-Armstrong Wellington bombers and Short Sunderland flying boats.

Malta was not self-supporting. There was no way it could survive without outside help, and this meant convoys of ships bringing in food for the 250,000 Maltese and the British garrison along with oil and military supplies of all kinds. 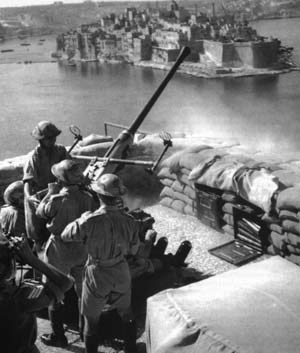 To end the threat of the French fleet being used by the Germans against convoys for Malta, the British navy sent some of its warships to Oran and Mers-el-Kebir in Vichy-French occupied Algeria to negotiate the future of French naval forces. When the French refused to negotiate, a number of their ships were sunk and damaged, and French naval forces at other ports were disarmed. Convoys from the eastern and western ends of the Mediterranean could now supply Malta more freely, easing the pressure on British submarines that had been bringing in essential military personnel, urgent stores, and oil. During September, two heavily escorted convoys docked in Grand Harbor with aviation fuel, ammunition, and food.

In November, reconnaissance aircraft from Malta photographed a large portion of the powerful Italian fleet anchored at the naval base at Taranto. Using the photos obtained by the reconnaissance pilots, planes from the aircraft carrier HMS Illustrious disabled three battleships, two cruisers, and several other ships, bombed the seaplane base, and started fires in an oil storage depot. The raid crippled the Italian fleet and made Mussolini reluctant to risk a direct confrontation with the British Royal Navy, lessening the threat against Malta.

In December, Malta-based reconnaissance planes discovered a force of 350 Luftwaffe bombers and fighters based in Sicily. In early January 1941, some of the German bombers attacked the Illustrious, but battered, smoking, and listing badly she managed to limp into Valletta’s Grand Harbor.

On January 16 more than 70 German Junkers Ju-88 twin-engined medium bombers and Ju-87 Stuka dive bombers, escorted by Italian CR42 fighters, attacked Valletta. Three Fulmars and four Hurricanes, the only serviceable British planes at the time, and an antiaircraft barrage from the shore and ships in the harbor, met them. The Italian fighters held off the British planes while the Junkers bombed the city and installations, leaving smoking ruins behind. Luckily, the Illustrious survived the bombing and, repaired, sailed out of Grand Harbor a week later.

In February, German armor under the command of Field Marshal Erwin Rommel, later to gain fame in North Africa as the Desert Fox, arrived in Tripoli to reinforce the Italians and stabilize the Axis position in Libya as both Germany and Italy began to massively reinforce their North African front. Malta was astride their supply routes across the Mediterranean, a constant danger to their shipping, so the British bastion had to be neutralized. In addition to stepping up the bombing of Malta’s airfields, dockyards, and other military targets, the Luftwaffe dropped parachute mines at night into the approaches to Grand Harbor and other anchorages. These sank and damaged a number of British ships, but in the first four months of 1941 submarines from Malta, avoiding the mines, sank 25 Axis supply ships bound for North Africa.

For more on the siege of Malta in World War II, check out these other stories: