The British Universal Carrier—often incorrectly referred to as the 'Bren Gun Carrier'—was a WWII vechile used by every Allied army in every theater.
1 Comment
Categories: WWII

The origins of the Universal Bren Gun Carrier can be traced to the Ford T-powered Carden-Loyd machines developed in Great Britain in the mid-1920s, specifically the Mark VI model of 1927. When Carden-Loyd merged with Vickers-Armstrongs in 1928 the small machine-gun carrier—cramped, lightly protected, unreliable but cheap to produce—became a major component of the British Army.

In 1934 Vickers-Armstrong launched a new model carrier designated the D50. The body was limited to a two-man compartment at the front, while narrow seats, running lengthways along the track guards at the rear, would accommodate the rest of the crew of six. The engine was located in the middle of the chassis and was the standard commercial Ford V-8 linked by a four-speed and reverse gearbox also made by Ford. The suspension and steering systems were good especially when it came to cross country travel.

In 1935, Vickers-Armstrongs offered another carrier model to the British War Office. Titled the Experimental Armored Machine Gun Carrier, it was fitted with the same engine, transmission, and suspension as the D50. Armor protection was provided by 6mm of medal plate. It could carry a Vickers heavy machine-gun which could be fired from either the carrier or dismounted by its crew from a tripod. (Learn all about the history of these and other weapons from the Second World War by subscribing to WWII History magazine.)

Designated by the Army as Carrier Machine Gun Number 1 Mark 1, it was rapidly followed by a new version the Carrier Machine Gun Number 2 Mark 1 which weighed in at 4.5 tons, was 12 feet long, 7 feet wide, and 5 feet high. Like the former model, the latter did not have seats on the track guards, but a small compartment, protected by a raised outer hull plate, created on the left side for a third crew member. Thus there was a driver, sitting front right, the machine-gunner to his left and the third man behind him. The machine-gun mounting came with an extra shield. The Mark 2 had an enlarged gunner’s compartment at the front so that it stood out like an angular bay on to the glacis plate. This configuration made it easier for the gunner to handle his weapon, and with the raised upper section, increased his protection.

The armor of the Mark 2 was increased to 12mm thickness; its engine, a Ford V8 90 degree L Head generated 95 hp with a top speed of 30mph. It had a four speed transmission with a maximum range of 140 miles and held 20 gallons of fuel. Its maximum recommended payload was 660 pounds. The Mark 2’s modifications seem to indicate the intention was that the vehicle was to carry and fight its weapons (a Bren Gun, and anti-tank rifle) from the carrier. Within a year over 1,100 of these were built under an Army contract.

The .303 Bren Gun Added to the Configuration: The Birth of the “Bren Gun Carrier”

In 1935 the British Army adopted a new light machinegun—the .303 Bren Gun—to replace its venerable Lewis Gun. The new automatic firearm, based on a Czech design and weighing 28 pounds, was distributed to the infantry down to platoon level. From 1937 onward, the Universal Carrier was adapted to carry the Bren Gun. By 1940 the popular and unofficial name for the Universal Carrier—”Bren Gun Carrier”—the War Office supplied ten such vehicles to each infantry battalion.

The crew of each Bren Gun Carrier consisted of three or four men: a driver, and two or three others who formed the Bren Gun Detachment. One carrier section also sported Boys anti-tank rifles. (It should be noted that each infantry section of a rifle company contained a Bren Gun, so these weapons were not exclusive to the Carrier Platoon).

Why Over Two Thousand Were in Service

Platoon strategy placed emphasis on employing the Bren Gun dismounted from the carrier, and stressed that the gun detachment had to dismount quickly to permit the carrier to withdraw to a safe place rapidly; the driver was never to leave the vehicle. Early models allowed firing from the vehicle, which had a special bracket attached to the front mounting of the machine gun and a crutch supporting the rear end. On later models the Bren Gun was not physically attached to the vehicle, merely resting on a rubber block in the weapon slot and held in place by the operator.

The start of the Second World War saw over 2,275 Bren Gun Carriers in service. Many of these saw action in France in 1940, and the Middle East. By the end of 1942 a further 6,000 had rolled off the production line. That same year saw an improved version of the Universal Carrier manufactured: the Mark II. The British built 11,000 of these during the war. This new model carried a crew of four. The main difference between this and the model Number 1 Mark 1 was that the front quarter of the top rack run was totally enclosed by a valance, and increased wielding in the hull assembly made it waterproof. 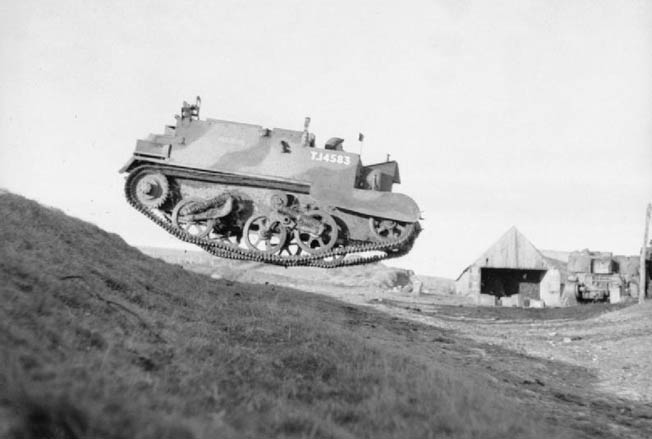 Construction of the Universal Bren Gun Carrier was done in the United Kingdom and to a lesser extent in Canada by the Ford Motor Company. The United States did not manufacture any since U.S. law allowed American factories only to produce weapon types normally used by the U.S. armed forces.

As the war progressed, Allied command found wider uses for the Universal Carrier. British motorized battalions—units comprising a British infantry brigade, in an armored division—used carriers in their Scout Platoons for reconnaissance missions from 1944 onward. After 1941 carriers began to tot 3” mortars, 66 rounds of high explosive and smoke shells. The mortar and its five-man crew would deploy the weapon outside the carrier.

The End of the War

In 1943, British infantry divisions were reconfigured to include a Brigade Support Group. Thirty Universal Carriers were assigned to each such unit to lend additional firepower to the division in the form of medium machine guns (Vickers), 4.2” mortar, and 20mm anti-aircraft cannon fire.

When World War Two ended, there remained vast numbers of Universal Carriers in existence. (Over one hundred thousand had been made since 1936). Although now obsolete, many remained in active service in various armies—British, Irish, German, Danish, Egyptian, and Israeli—until the 1960s.