A Wehrmacht Pioneer Laid to Rest 70 Years After Operation Barbarossa

Thanks to technological advances and local help, a Wehrmacht Pioneer was finally located and laid to rest years after Operation Barbarossa.
No comments
Categories: WWII

P.F.C. Mathias Hansen and Corporal Lorenz Gehlen sat on empty panzer mine boxes, ate their supper, and lit up their cigarettes…

“Well, if it isn’t Locht, my favorite brother-in-law,” Hansen said. Only people who knew Lorenz well called him Locht. “I would’ve expected the Devil himself before you.” The two men shook hands and tried to talk at the same time.

This story was first published in theApril 2015 edition of WWII History. Order your subscription here!

The last time they had time together was for a beer on White Sunday, a week after Easter in April 1939, when Lorenz’s son, Willy, went for his first communion. Because Lorenz and Mathias were Catholic, they were both granted leave. At the time, White Sunday was almost as big a celebration as Easter in the Lower Rhine.

Mattes & Locht Before the War 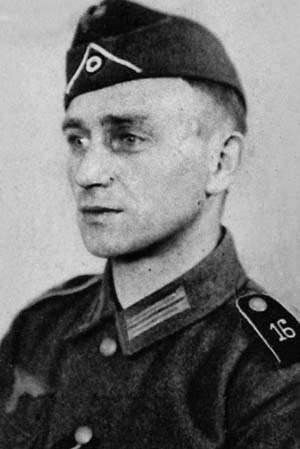 Mathias, or “Mattes” as everyone called him, had married Lorenz’s younger sister, Kaline, in the late 1920s, and a son, appropriately named Hans Hansen, was their firstborn. A girl, Annemarie, was born in 1937. A year later Mattes found work in a construction yard near Lübeck and registered as a temporary resident there. The family was living there when he got his call-up papers from the Wehrmacht. He was given 10 days home leave to pack up and say goodbye before reporting to the Pioneer Kaserne in Lübeck on September 1, 1938, a year to the day before the invasion of Poland. Mattes and Locht did meet briefly once more before their long separation, at Christmas in 1940.

In 1939, Mattes went to Poland and Locht was sent to the Wehrmacht range in Hillersleben near Magdeburg to learn how to drive infantry vehicles, and then to Ohrdruf for more training. Operation Barbarossa swallowed both men, but Russia was a big country and their paths did not cross until Demjansk. Mattes was a skilled Pioneer, and Locht was an assault gun operator in the 184th Sturmgeschütz Abteilung. The 184th fought in many battles with the Russians, especially in the winter of 1941-1942 around the Cholm Pocket.

The 184th was formed at Zinna near Jüterbog in August 1940 and designated as Sturmartillerie-Abteilung 184 with three batteries, and later, in February 1941, as Sturmgeschütz Abteilung 184. It was never given division status but was under the command of various armies or even army groups and sent to divisions when needed as a mobile artillery or antitank unit. In January 1942, it was ordered to the Cholm area and attached to XXXIX Corps under the Sixteenth Army of Army Group North. In July of that year, it was transferred to the 30th Infantry Division of II Army Corps within the same army group and eventually trapped with II Army Corps in the Demjansk Pocket. It was March 1943 before the surviving members of II Corps were evacuated.

Sometime after midnight that night in Demjansk in August 1942, the two soldiers parted. The 184th was scheduled to advance toward Kalinin, and Mattes’s pioneer unit had some bridging operations to attend to across the Pola River, a tributary of the Lovat River, which runs into Lake Ilmen.

After their chance meeting in Demjansk, Mattes and Locht never saw each other again. Kaline received a telegram in late September 1942 saying that her husband had been killed in action in Russia and that his remains had been buried near Starija-Russa. No other details were available.

Locht came home in July 1945, walking most of the way. He had been captured in Denmark, a world away from Demjansk and another world away from home. He had been in a hospital in Denmark recovering from serious wounds received on August 28, 1943, near Starija-Russa, just south of the Estonian border. Before he was wounded, Locht and the 184th were on the move to Selischarevo in the Waldai Hills when his battery was surprised by an antitank gun, which opened up on their lead vehicle.

Locht was in the following Sturmgeschütz, not driving at the time, but in charge of the gun. He noticed a small church with an onion dome on a hill half a mile away. The Russians had hidden the 37mm gun in the church entrance. He aimed his 50mm cannon at the church and prayed that God would forgive him for firing on His house. One shot, and the position was destroyed. At Welikije Luki, however, Locht’s crew was not so lucky. The gun carriage sank into a swamp near the river and was temporarily lost. It was days before Locht’s Sturmgeschütz was extracted.

Kaline, an early war widow, moved away from her hometown with her children and remarried in 1950. Locht’s son, Willy, met Annemarie once in 1966 during a visit to Germany from the United States, where he had come to live after growing up and serving a stint in the French Foreign Legion. Annemarie could not remember ever seeing her father. Kaline was happily married, and Mattes was forgotten. Kaline died in 1974, and Locht’s family lost track of all the relatives. Annemarie and Hans were never heard from again. Locht died of a fall in 1976.

Returning to the Barbarossa Gravesites

Years later, with the advent of the personal computer and the Internet and the collapse of the Soviet Union, information began to flow more freely from behind the former Iron Curtain. International war grave commissions at work in many countries around the world began seeing to the decent burial and registration of millions of war dead, even in the vast reaches of the former Soviet Union.

The Volksbund Deutsche Kriegsgräberfürsorge (German War Graves Commission) is responsible for the maintenance and upkeep of German war graves in Europe and North Africa. Its charter is the acquisition, maintenance, and care of German war graves, assisting nearest relatives of the fallen, preserving the memory of the sacrifices made, and promoting educational outreach programs throughout Europe. Today the commission is caretaker for about 2.6 million dead in more than 800 military cemeteries in 45 countries. The commission’s personnel include about 8,000 volunteers and 571 paid employees.

With the end of the Cold War, the commission gained access to gravesites in Eastern Europe where many German soldiers had lost their lives in World War II. Since 1991, more than 500 cemeteries where the dead of both world wars are interred have been established or restored in eastern, central, and southeastern Europe. More than 750,000 sets of remains have been buried in new graves.

This story was first published in theApril 2015 edition of WWII History. Order your subscription here!

Laid to Rest at Last

One cemetery was created close to the Pola River, near the village of Korpowo, halfway between Demjansk and Starija-Russa. When commission personnel arrived in the area in 2001, they had an enormous task ahead of them. Most graves dug in Russia during the war were shallow with only birch crosses and steel helmets to mark their locations. The helmets had long since been plundered by souvenir hunters or turned into food bowls for pets and livestock by the poor local people. Commission volunteers in the region between Demjansk and Starija-Russa had to first find evidence of burial sites and then find any surviving witnesses who knew or had seen anything from the summer of 1941 to early 1944. About 33,000 German soldiers have now been buried at the Korpowo site, and it is estimated that eventually 50,000 will be interred there.

And Mattes? Well, a babushka living in a sod hut not far from the Pola had seen quite a bit of the action there during World War II. She watched as the 30th Pioneer Battalion attempted to build a bridge on September 6, 1942, and she saw them attacked by Russian infantry. Several Germans were killed, and they were buried by their comrades near the river. The woman tended the graves even during the communist cleansing that went on for years after the war.

When commission personnel arrived asking about burial sites, this 90-year-old woman took them to the graves. The remains of Corporal Mathias Hansen were exhumed and identified. He now rests in the German War Memorial Cemetery of Korpowo on a lonely stretch of road between Demjansk and Starija-Russa. In March 2014, his closest living relative, Locht’s son Willy, was notified in a letter from the commission.

He was not forgotten, not by his countrymen and not by his nephew, Willy Gehlen.